Difference between revisions of "Michael Meylan"

Michael Meylan is a senior lecturer at the University of Auckland. He completed his Ph.D. under Vernon Squire in 1993 which was concerned with modelling ice floes using linear wave theory. He has worked on various problem connected with linear water wave theory in the subsequent time. 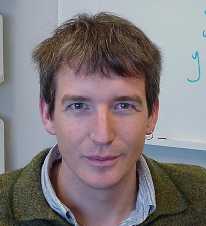 Mike's PhD thesis concerned a two-dimensional floating elastic plate which was solved using a Green function method. The motivation for the solution was to model ice floe and at the time he was ignorant of the engineering applications (e.g. VLFS). Mike independently derived the Green function which was well known in water waves and goes back to John 1950. The derivation method was copied by Squire and Dixon 2000 (based on a close reading of his Phd thesis) for the case, not of a free surface, but for a free surface covered by a plate The results of this research were publised in the Journal of Geophysical Research were largely ignored by later researchers. His Phd thesis probably had a much greater influence, through the researchers who followed at Otago and it is continuing to appear in journal citations. The solution method using a Green function coupled with a Green function for the plate (the later Green function does not extend to three dimensions because of the much more complicated boundary conditions which exist). The solution method has been superseded by more efficient methods, most notably the Wiener-Hopf method developed by Tim Williams and the Eigenfunction Matching Method (which applied to multiple plates) developed by Kohout et. al. 2006.

Mike then extended the two-dimensional solution to a three-dimensional circular elastic plate (Meylan and Squire 1996). This solution again used a Green function method coupled with the eigenfunctions for a circular plate (which can be computed in exact form, at least up to solving an equation involving Bessel functions. The solution method has been superseded by Peter, Meylan and Chung 2004. Mike also developed a method to solve for plates of arbitrary geometry, initially using a variational method (Meylan 2001) and later using the Finite Element Method (Meylan 2002).

Mike then worked on using the solution for a circular elastic plate to try and construct a model for wave scattering in the Marginal Ice Zone ( Meylan, Squire and Fox 1997). This model was developed independently of the model of Masson and LeBlond 1989 but shares many similarities with it.

Mike then began to work on a very abstract (and difficult problems) of an eigenfunction expansion method for the non-selfadjoint operator which arises in the scattering model of Meylan, Squire and Fox 1997. This work is still unpublished although a paper has been submitted. It is not a problem in water wave theory.

Mike began working on the Time-Dependent Linear Water Wave problem. He solved for the time-dependent motion of a Floating Elastic Plate on Shallow Water. The solution was found using a Generalised Eigenfunction Expansion and as a sum over Scattering Frequencies (Meylan 2002. This lead to a collaboration with Christophe Hazard and to a solution of the problem of a Floating Elastic Plate on Finite Depth Water.

Mike developed a method to solve for multiple floes using an extension of the method of Meylan 2002. This was not published but was used to test the multiple floe scattering method which was developed with Malte Peter using Kagemoto and Yue Interaction Theory which was developed during his masters in 2002. Specifically, in Peter and Meylan 2004 the Kagemoto and Yue Interaction Theory was extended to infinite depth and a coherent account of the theory for bodies of arbitrary geometry was given. This work required the development of very sophisticated wave scattering code for bodies of arbitrary geometry. As a direct result of this work a new expression for the Free-Surface Green Function was developed and this was published separately ( Peter and Meylan 2004).

Mike also revisited the problem of a floating circular plate and developed a method based on the Eigenfunction Matching Method (Peter, Meylan, and Chung 2004). Rike Grotmaack worked with Mike for an honours project in 2002 on Wave Forcing of Small Bodies ( Grotmaack and Meylan 2006)

Malte Peter and Mike have continued to work together and have developed an alternative method for the Infinite Array based on Kagemoto and Yue Interaction Theory (Peter, Meylan and Linton 2006). This method has been recently extended to a Semi-Infinite Array.