It is important to realise that the spectra presented in the section are attempts to describe the ocean wave spectra in very special conditions, namely the conditions after a wind with constant velocity has been blowing for a long time. A typical ocean wave spectrum wil be much more complicated and variable. For example it may have two peaks, one from distance swell and the other generated by the local wind.

Various idealized spectra are used to answer the question in oceanography and ocean engineering. Perhaps the simplest is that proposed by Pierson and Moskowitz 1964. They assumed that if the wind blew steadily for a long time over a large area, the waves would come into equilibrium with the wind. This is the concept of a fully developed sea (a sea produced by winds blowing steadily over hundreds of miles for several days).Here, a long time is roughly ten-thousand wave periods, and a "large area" is roughly five-thousand wave-lengths on a side. 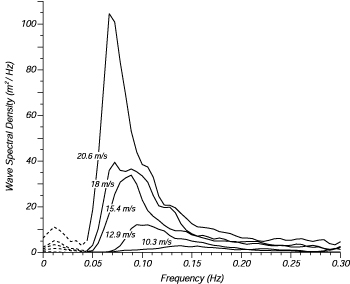 Figure 1 Wave spectra of a fully developed sea for different wind speeds according to Moskowitz 1964.

To obtain a spectrum of a fully developed sea, they used measurements of waves made by accelerometers on British weather ships in the North Atlantic. First, they selected wave data for times when the wind had blown steadily for long times over large areas of the North Atlantic. Then they calculated the wave spectra for various wind speeds, and they found that the spectra were of the form (Figure 1):

For most air flow over the sea the atmospheric boundary layer has nearly neutral stability, and

The speed of waves at the peak is calculated from (16.10), which gives:

The significant wave-height is calculated from the integral of [math]\displaystyle{ S\mbox{ }(\omega) }[/math] to obtain:

(the factor of [math]\displaystyle{ 2\pi }[/math] insures that the area under the curve remains the same).

In the following we omit the ' symbol. For practical reasons, it has also become standard to relate the variables to the main sea state parameters rather than wind speed, and to use slightly different values so that the Pierson-Moskowitz spectrum can be expressed as 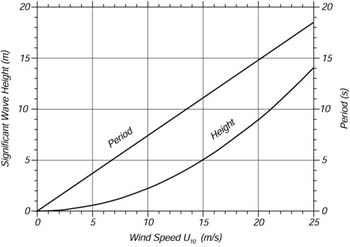 Figure 2 Significant wave-height and period at the peak of the spectrum of a fully developed sea calculated from the Pierson-Moskowitz spectrum.

Hasselmann et al. 1973, after analyzing data collected during the Joint North Sea Wave Observation Project JONSWAP, found that the wave spectrum is never fully developed. It continues to develop through non-linear, wave-wave interactions even for very long times and distances. Hence an extra and somewhat artificial factor was added to the Pierson-Moskowitz spectrum in order to improve the fit to their measurements. The JONSWAP spectrum is thus a Pierson-Moskowitz spectrum multiplied by an extra peak enhancement factor [math]\displaystyle{ \gamma^r }[/math] 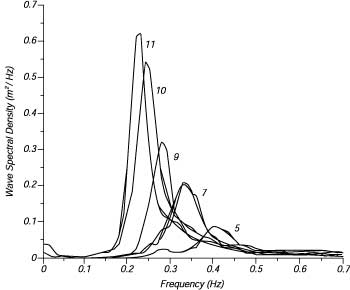 Figure 3 Wave spectra of a developing sea for different fetches according to Hasselmann et al. 1973.

Figure 3 show wave spectra as mearured from {[Hasselmann et al. 1973]] and Figure 4 shows a comparison of the JONSWAP and Pierson-Moskowitz spectra. 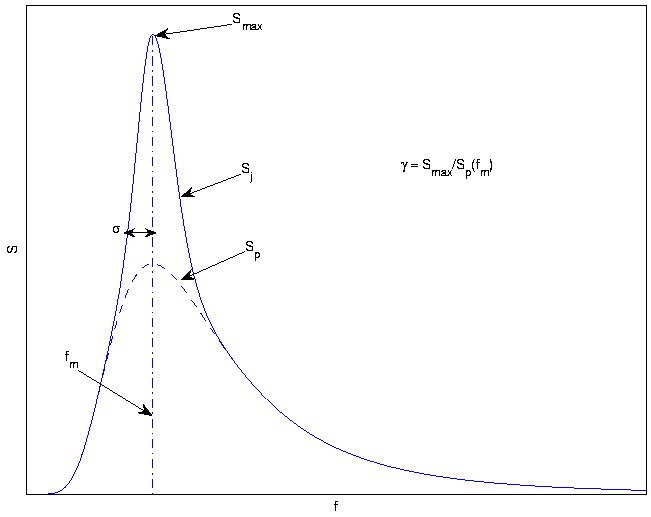 Figure 4 The JONSWAP and Pierson-Moskowitz spectra.

Wave data collected during the JONSWAP experiment were used to determine the values for the constants in the above equations:

where [math]\displaystyle{ F }[/math] is the distance from a lee shore, called the fetch, or the distance over which the wind blows with constant velocity.

The energy of the waves increases with fetch:

The JONSWAP spectrum is similar to the Pierson-Moskowitz spectrum except that waves continues to grow with distance (or time) as specified by the a term, and the peak in the spectrum is more pronounced, as specified by the g term. The latter turns out to be particularly important because it leads to enhanced non-linear interactions and a spectrum that changes in time according to the theory of Hasselmann 1966.

Generation of Waves by Wind

We have seen in the last few paragraphs that waves are related to the wind. We have, however, put off until now just how they are generated by the wind. Suppose we begin with a mirror-smooth sea (Beaufort Number 0). What happens if the wind suddenly begins to blow steadily at say 8m/s? Three different physical processes begin:

The material in this page has been derived from Introduction to Physical Oceanography by Robert Stewart.